NEW EDITION OF “SPORTS INNER CITY TV” WEBCAST IS NOW STREAMING WORLDWIDE! JUST CLICK THE WEBCAST ABOVE. WATCH VIA YOUR SMARTPHONE, MAC, TABLET OR DESKTOP. GUEST IS A EXCLUSIVE ON ONE ON INTERVIEW VIA SKYPE AUDIO WITH SINGER, HIP-HOP ARTIST, BUSINESS OWNER AND PUBLIC SPEAKER SUGA-T. OF COURSE THE PROGRAM FEATURES HOT HIP-HOP-R&B AND POP MUSIC VIDEOS AND MORE!! 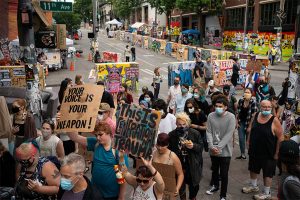 I want to start off by saying this. I want to say THANK YOU to all the young people in the Black Life Matters movement and other movements.

They have stood up and spoke out about the mistreatment of African Americans by the police here in Seattle and of course nationwide. But having said that their is some things going on.

So called “media” popping up on Facebook and You Tube. By folks who have ZERO experience as broadcasters and all of a sudden they are called “leaders.” Folks are calling so called “press conferences” and the media run to them and put it on TV. It seems everyday there is a different leader.

IT IS ALL ABOUT EGOS!!! I am watching the news and see different groups calling for different things. NO DIRECTIONS, NO LEADERSHIP WHAT SO EVER!!!! DIFFERENT MARCHES. WHAT THE HELL!!! It has me upset big time!!

Go to the school called LEADERSHIP UNIVERSITY!!!! BECAUSE THEY DO NOT HAVE CLUE!! The young so called leaders need to stop going on CNN and MSNBC. One so called “leader” will appear on Fox News this weekend. I just saw a clip on KING TV.

Again they do not speak for me. Again, too many egos. To many people thinking they are speaking for the African-American community of the Seattle area. THEY DO NOT!!! Carl Mack please come back and show us what a TRUE leader is. If you disagree I don’t give a damn!!!!

These so called “leaders” jumping on local tv and radio and on national television, need to learn about the late State Representative Sam Smith. Like Carl Mack, Mr. Smith was a TRUE LEADER IN THE AFRICAN AMERICAN COMMUNITY OF SEATTLE!!!! Real talk!!! So was Mr. Eddie Rye, and former King County Council member Larry Gossett.

By the way, Brotha Mack just used a GREAT term to describe some of these so called “leaders” Many are MICROPHONE CHASERS!!

I have held my feelings inside and I had to let my feelings out after watching many different so called “press conferences” about what is going on here in Seattle. Folks saying different things, different views. NO LEADERSHIP. YES the younger crowd is learning.

I guarantee you this, if this was going on with the Vietnamese community or the East African community things would be handled MUCH differently.

Folks, mostly young folks ( white and black) did a GREAT, LET ME REPEAT…GREAT job in forming CHOP. It got the attention big time of Mr. Trump. Trump blasts my city of Seattle every chance he gets. Along with a person he hates, Washington State Gov. Inslee. Trump blasts Seattle’s Mayor Durkan. Folks have made their point about the murders of the late George Floyd and others.

But now things have turned dangerous at CHOP. Too many shootings. A young fella killed. Businesses are leaving because they do not feel safe. Residents around CHOP are very afraid. As I type this some folks do not want to leave CHOP while the city is saying enough is enough.

The Seattle Police East Prescient  is empty. Seattle Police Chief Carmen Best is between a rock and a hard place. She wants to keep things in line with her cops, but she also wants to try to get along with Mayor Durkan. Keep in mind Chief Best was not Mayor Durkan first choice to because the head of Seattle’s police department. I am here to support our African American head of police!

Yes, since Mr. Mack left town, nothing but problems with the NAACP. Where is the Washington State Commission on African American Affairs? A organization that the late Tony Orange and the late Oscar Eason used to be the head of. The bottom line is there is no leadership from the African American community. Thanks for the feed back from my friend lawyer James Bible. A man I respect big time. Keep up the fight James.

And again, THANK YOU to all the young people fighting for change.