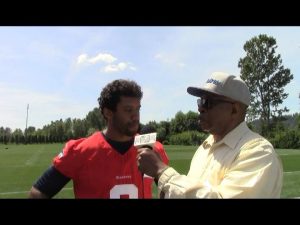 Hello everyone and thanks again for being here on “Music Inner City News Magazine.” Where I offer stories from entertainment, urban sports and more.

Others (people that I know)  around here are followers of what I do on “M.I.C-TV” and here online, but I try to be a  leader and not a follower. I try to lead because of you ladies and gentlemen. I get a lot of visitors here on this site. To be truthful, with limited promotions on social media and elsewhere.

But I am grateful for the support we have and god willing maybe one day, someone will write me a big check to help me with my media. I will be a VERY VERY HAPPY PERSON!! Maybe YOU are that person. If so holla back at gcurvey@yahoo.com or hit me via Facebook at facebook.com/gordon.curvey.

Readers after two games in the National Football League, the person most sports writers and sports radio and TV hosts say is the leading choice for the MVP Award is our Seahawks own, Russell Wilson!

I did not know this but former guest on out TV program, Russell has NEVER obtained one vote for MVP! Not one vote. How on earth can that be? But it is true. Before the season even started, people was talking about Russ being in the running for the MVP trophy. Well as of now, he is on his way to obtaining the big trophy to put in his home.

Russ is tossing pinpoint passes to wide receivers Tyler Lockett, future star TK Metcalf and even running back Chris Carsen and others. Wilson throws the best long ball in the NFL. That is for sure.

Now I have to say this. As a Seahawks fan, I get worried at some of big hits he gets. This has went on since he has been the QB for the Hawks. But as we know, Russ takes these hits and god up above he hops right up for the next play. I do not know how he does it. Because some of the hits to Russ are big hits readers.

In the NFL of course their are plenty of great QBs like for instance KC’s Pat Mahomes of the champion Chiefs, current MVP Lamar Jackson of the Ravens, Dak Prescott and others.

The NFL is full of young dynamic QBs. But this year at least after two games, the talk of the NFL is Wilson. In his post game press conferences, Russ as always does not let his success go to his head. He knows the Seahawks have only played two games for goodness sake. He says, the team after a 2-0 start have not done anything yet.

One thing for sure, their has been hella injuries in the NFL. Is it because of a lack of pre-season games because of the TERRIBLE COVID19. Which by the way has taken more than 200,000 people away from us.

Seahawks fans are praying Wilson will not be on the NFL injury list. Because we all know, Russell Wilson is the Seahawks! HE IS THE MAN! The Seahawks CANNOT HAVE RUSS HURT!! But as I said earlier, Russ has taken a beating at times this year in two games and also for the last few years.

Before I end this story, as a football fan, a NFL fan, a sports fan, I am asking myself WHY is Cleveland Browns QB Baker Mayfield doing so many damn commercials/marketing on TV?

This dude has done NOTHING so far in the NFL! NOTHING!! But I continue to see brand new commercials featuring Mayfield. I do not understand ladies and gentlemen. Here is a question. Why isn’t Russell Wilson doing a bunch of commercials on TV?

He actually has done something in the freakin NFL! He has even won a damn Super Bowl everyone!! Again, Mayfield has done nothing!!

I was very happy to obtain a interview with Russ at the Vmac here in Renton, a city near Seattle. I consider it one of my big interviews in the almost 29 years of producing my media. I know I am lucky because a lot of local media have not had a chance to interview Russ. Of course special thanks to the Seahawks.

With the support of the Seahawks, we will feature short segments with Seahawks players and head coach Pete Carroll from pre and post games and during the week at practice. The segments will be on “Sports Inner City TV” webcasts which you can watch right here via your smartphones, iphones, macs, tablets and desktops 24-7 on demand. The first three home games at Century Link will be zero fans. WOW watching the games with no fans is just unreal.

For the last few years I have been lucky enough to get a press pass to cover Seahawks games here at home at Century Link. But of course, because of COVID19, things have changed DRASICALLY!!

Watching the Hawks beat another dynamic QB, Cam Newton and his new team the New England Patriots in the VERY exciting 35-30 with no fans in the stands was shocking!! A game in which Russ threw for a WHOPPING FIVE TOUCHDOWNS!!

IF the fans were in Century Link for the last play of the game when Cam was stopped at the 1 yard line, I would have heard the fans here at my apartment which is about 10 minutes from Century Link!!!

So most likely all season I will cover the Hawks by watching the games on TV and going online to a special media link to obtain interviews from press conferences. I am very happy to have access to use the press conference interviews on my “Sports Inner City TV” webcasts!!

We will be back soon to discuss our Seattle Seahawks led by hopefully the MVP for this season, Russell Wilson. Next game is against Prescott, Elliott and the Jerry Jones owned Dallas Cowboys. For some reason STILL called “America’s Team.” Will be back next week to discuss the game. Again thanks very much to the Seattle Seahawks!!

Time For Washington Redskins To Change Their Name

NBA Players Reject Owners Deal So Will We See A NBA Season?