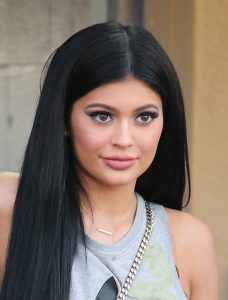 I am always looking for good stories for the fans of my website all over the world. I saw this story on Kylie Jenner and I thought it is very very interesting. So here it is.

Reports are Jenner is now worth $1 BILLION! So if this is the case this makes her the world’s youngest billionaire in history ladies and gentlemen. I should say self-made billionaire. Kylie took the new title from Facebook co-founder Mark Zuckerberg.

Zuckerberg became a billionaire in 2008 at age 23 and Seattle area resident and Microsoft co-founder Bill Gates held the title in 1987 at age 31.

If you did not know, Kylie Jenner wealth comes mainly from Kylie Cosmetics, her makeup company, which Forbes values at a WHOPPING $900 million! Kylie Cosmetics, is projected to make up to $1 billion in lifetime sales by the year 2022.

Jenner signed an exclusive distribution deal with the retailer Ulta last summer and that deal QUICKLY boosted sales for her company. It is reported that Kylie Cosmetics sold $54.5 million worth of products in Ulta stores over the FIRST SIX WEEKS OF THE DEAL! WOW!!

Kylie says that she plans to work on the company “forever” and will pass the company down to her daughter, Stormi who recently tuned 1!

Haters of Jenner on social media have a issue with folks saying Jenner is a “self made” billionaire because she was born into wealth and fame. Which is true. She is the most successful family member of the Jenner and Kardashian family. Her half sister Kim Kardashian West is said to be worth about $350 million. Hey, Kim ain’t doing too bad!

Also readers Kylie earns money from her paid app called “Kylie Jenner Official App,” and also on sales of products from “The Kylie Shop,” and also two apparel lines with sister Kendall Jenner. Plus a book series and of course the TV shows “Keeping Up With The Kardashians” and “Life Of Kylie” PLUS a partnership with retail brands Adidas, Topshop and Quay Australia.

And I am not finished when it comes to Kylie. In 2015, Jenner launched her beauty brand with the $29 Kylie Lip Kit. The product sold out in MINUTES!! I SAID MINUTES!!!

Within 18 MONTHS, the company made $420 million in sales!!! DAMN!! Her 2016 holiday collection release made nearly $19 million IN ONE DAY. LET ME REPEAT…ONE DAY!! Readers that is just a unreal story. It just is. No way around it!

So I can go on and on on Kylie Jenner. The young lady is a very very successful business lady. I do not care if she was born into money and wealth. Kylie has done work on her own to became the world’s youngest billionaire. So folks need to stop hatin on Jenner! REAL TALK!!

Why Do People Continue to Disrespect President Obama?

“Take Our Country Back” What In The Hell Does That Mean?