UPDATE: A Utah Jazz fan has been banned for ever from attending Jazz games in Salt Lake City. More work needs to be done. 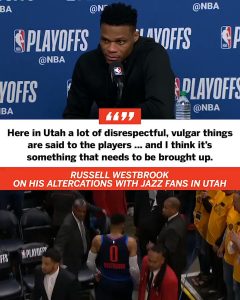 Sports fans it has got to the point where NBA Commissioner Adam Silver needs to step up and FINALLY do something about a problem that is not new.

The problem is certain fans who attend Utah Jazz NBA games in Salt Lake City, Utah. Like I said, this problem is not a new problem.

But in my opinion, this problem has got completely out of hand and Silver and the owner of the Jazz need to speak up immediately!

This problem is fans at Jazz games (mostly sorry to say white fans), come to the games and then have a few beers and then think and say ANYTHING to NBA players. Of course the NBA is about 80% African American.  This situation has got way out of hand readers.

In the past NBA players like the great Kobe Bryant and Stephen Jackson and Draymond Green and many others had/have big problems with drunk and loud Utah Jazz fans,

Stephen Jackson recently told a story about being at the free throw line and Jazz fans held up pics of Jackson IN A JAIL UNIFORM! I am not lying readers. But lately the favorite target for some unknown reason has been OKC star guard Russell Westbrook. I just do not understand why.

All Westbrook does is play extremely hard each and every game. Westbrook is one of a few players in the NBA I love to watch play all the time. He is just a great player. Mr. Triple Double.

For some reason Fox Sports host Colin Cowherd has blasted Russ TIME AND TIME AND TIME AGAIN on his TV show on Fox. In my opinion, Colin might be helping the Jazz fans. They see Cowherd treating Russell in a very negative manner on TV, so they think they can go buy a ticket and come to Jazz games and say ANYTHING to mainly African American players and to Russ.

Ladies and gentlemen their is no doubt in my mind that these mainly white Utah Jazz fans are throwing around the “N word” when they are yelling at Westbrook and other African American players.

And fans may be talking about players mom or dad and more. Last season, Utah Jazz fans yelled at Westbrook while he was walking off the court and one lady in the stands put a damn cell phone about a inch from Westbrook’s face!! Hell I do NOT blame Russ for being upset!! This is crazy!

Jazz fans again mainly white fans will continue to treat African American visiting player in sorry to say racist ways UNTIL the owner of the Jazz and Silver step up and do something about certain Jazz fans.

Fans need to have their season tickets taken away and banned from Jazz games. The Utah Jazz radio and TV hosts need to talk about this severe problem that has got completely out of hand and it needs to happen soon because I am telling you, it is a matter of time before Russ or another African American player is going to go after a drunk Jazz fan in the stands!!

Utah Jazz broadcaster David Locke who used to on sports radio KJR here in Seattle needs to get behind the microphone and speak to loud and drunk and yes racist Jazz fans. This mistreatment of Westbrook and others has to stop.

Yes fans buy a ticket and want to come to Jazz games and buy a few beers etc, BUT that does not give them the permission to say VERY negative things to mainly African American visiting players. And for some reason Westbrook stands out from the rest.

I am telling you readers, it is going to happen that a player will go into the stands and go after a fan unless the Utah Jazz and Adam Silver step up. And Colin Cowherd needs to STOP the mistreatment of Russell Westbrook.

Again, I do not understand why Cowherd beats up on Russ. EVERY CURRENT OR EX NBA PLAYER DISGREES WITH COWHERD WHEN IT COMES TO WESTBROOK! Except for the brainless Jason Whitlock. Whitlock is a clown who I am constantly wondering WHY this buffoon is host of a TV show.

Whitlock blasts Russell too along with Colin Kaepernick. He is a Cowherd puppet. So folks I am asking as a NBA fan, a Russell Westbrook fan too. What is Adam Silver and the owner of the Utah Jazz going to do about racist, drunk and sorry to say white Utah Jazz fans?

This is why many African American players, many from the inner cities of Alabama or East St Louis or the 5th Ward in Houston or Compton, Ca etc, do not want to play for the Jazz. With the way Westbrook and Draymond Green and many other African American players are treated at Jazz games, I do not blame them readers. I really do not.

I Am Shocked At What Happened At The Grammys

Rihanna Does Not Care What People Think