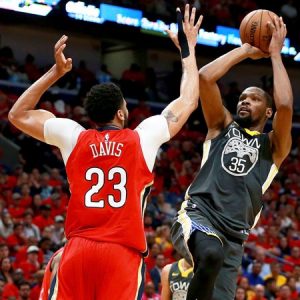 I am a NBA junky. I love the NBA. It is my favorite sport. It is hard to do a NBA related webcast in a city without a NBA team since our Sonics left for OKC in 2008.

So I just have to get interviews when I can from NBA players and do NBA related stories I think that is interesting for our readers on on “Music Inner City News Magazine.” I think I do a pretty good job in putting good articles here on my site.

I want to give my opinion on this topic. I am TIRED of hearing about where Kevin Durant might play next year and I am tired of hearing where Anthony Davis might play also. TIRED!!

KD will be a free agent and their is big time rumors that he might leave the Golden State Warriors and maybe sign the Knicks. Durant’s jersey sells have fell a whooping 75%!! And K.D has done nothing to stop fans from thinking where he might play next season.

Anthony Davis has asked for the New Orleans Pelicans to trade him. He wants to play for a winning team and the Pelicans ain’t going anywhere this season as far as the playoffs.

The Pelicans since AD’s request, has done some crazy crazy things with AD when it comes to his playing time. Since his trade demands,  N.O. has played A.D for three quarters, then for some he is not playing in the 4th. I just do not understand this at all.

Readers I just think Davis was wrong to ask for a trade. This guy is making millions of dollars playing what millions of other basketball players wish they could.

He is able to do what ever he wants as far as money to buy it. He is one of the top players in the NBA and yes everybody wants to win or be on a winning team. But I just feel A.D going public with his demand for being traded to a winning team is just wrong.

As far as KD goes. his giving hints that he may leave Golden State. First of all truth be told I have a HUGE problem with Durant joining a already great team with Thompson, Green and Curry. KD has taken a lot of negative press since he left OKC for the Warriors. Some of it he has not liked and he will fire back. Fans will blast him on social media and KD reads some it and he will respond. WRONG!

I am also tired of hearing Celtics PG Kyrie Irving “crying” about he does not care about the media and all he wants to do is play basketball. Also their are rumors about where he will play next year and will he team up with KD on the Knicks or the Lakers.

NBA head person Adam Solver recently said what the Pelicans are doing by playing Davis just three quarters and sitting him the 4th is not a good thing for the sport. I TOTALLY AGREE!!

Anthony Davis is paid MILLIONS of dollars to play basketball, not to complain about wanting to be traded to winner. So other words I think AD needs to shut the f..k up and play ball in my strong opinion.

And Durant also in my opinion has turned into a arrogant punk. Snapping at reporters at post game press conferences etc. Dude needs to chill out folks!! Yes I am bringing back the words..chill out when it comes to Durant snapping at reporters when they ask him a question.

I do not remember MJ snapping at reporters.  Again ladies and gentlemen, these spoiled brats came up in a poor or middle class environment. Then all of a support they obtain great wealth. And I think a lot of these sports superstars need to remember where they came from.

And they need to stop demanding this and that and realize that MILIONS AND MILLIONS of guys would trade places with them in a SECOND in order to play in the NBA and make millions of dollars!

I do not give a damn about hearing KD blasting reporters, Irving giving shorts answers to reporters and AD acting like a baby and demanding a trade! I love the NBA, it is my favorite sport, but the part about players crying and acting like spoiled brats turns me off when it comes to the NBA and sports period.

A-Rod Must Think All Of Us Are Crazy!