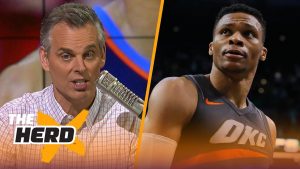 Ladies and gentlemen. Something has been going on for years and it’s time to let everyone reading this know my true feelings about Fox Sports host Colin Cowherd.

Cowherd started bashing OKC guard Russell Westbrook when he was at ESPN. He left ESPN and STILL treats Westbrook like dirt on Fox Sports.

Here is a question…….WHY? Russ is a great great player. One of the top players in the NBA and anyone who knows about basketball and the NBA knows this except for Colin Cowherd. Guest after guest comes on Cowherd’s program “The Herd” and they disagree with him about Russell Westbrook!!

Yes Russ dribbles a lot and yes he has a lot of turnovers some games and yes his shooting % is not great. But when it comes to Russell Westbrook you have to look at his TOTAL game! He is a freak of nature.

Colin Cowherd for some unknown reason looks for the negative ALL THE TIME when it comes to Westbrook. Why I just do not understand. But I am not the only person who is confused as to why Cowherd treats Westbrook so badly all the freakin time. Day after day during the NBA season.

“The Herd With Colin Cowherd” constantly brings current and ex NBA players on the show and NO ONE agrees with Cowherd when it comes to his blasting of Russ. NO ONE! But Cowherd STILL blasts Westbrook TIME AND TIME AND TIME AGAIN! He never has anything positive to say about Russ.

Westbrook won the MVP a few years ago averaging a freaking TRIPLE DOUBLE FOR THE SEASON!! Ladies and gentlemen what Westbrook did and has done is just unreal. “The O” Oscar Roberson said so and he is a man whose record was broken by Russ.

He is a walking triple double every game. Rebounds, assists and points. What Cowherd fails to realize is that if it was so easy to get a triple double more players would do it right readers? But what is the point. MORE PLAYERS DO NOT DO IT RIGHT? Very seldom do we see NBA players getting triple doubles EXCEPT for Russell Westbrook! Maybe Lebron once in awhile and that’s about it.

But the Westbrook hater Colin Cowherd is as blind as the late great Ray Charles, as blind as the great and former guest on my TV show “Music Inner City TV”, Stevie Wonder, when it comes to how great Westbrook really is!! 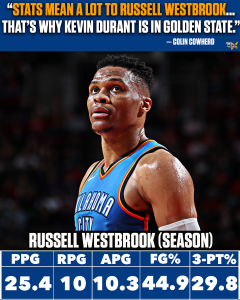 He just pulls out the pure negativity when it comes to his treatment of Westbrook! Program after program. Co-host, the beautiful and knowledgeable on sports Joy Taylor feels like I do and feels like many current and ex NBA players when it comes to Russ. And that is when Westbrook obtains a triple double most of the time OKC wins.

But Joy has to “ride the fence” because Cowherd is the reason she is getting a nice paycheck. But I can see it on her face how she really really feels. Joy Taylor agrees with me and the MANY others who disagrees with Cowherd’s unfair treatment of Russell Westbrook.

I was watching Cowherd’s program today and he brags on Paul George and the great season he is having. And yes, George is having a MVP type season. He is a player who can score and play great defense. This is for sure.

But Cowherd NEVER wants to give Westbrook credit on ANYTHING other than Russ is “athletic.” GIVE ME A DAMN BREAK COWHERD!! Colin Cowherd has NOT ever invited him on his program!! He said he has. HE IS LYING!!!! He has never invited Westbrook on his show.

The clown in Cowherd has NEVER invited Russell Westbrook on his damn program and these are facts readers. I said know it. Cowherd WILL NEVER SAY THE BS HE SAYS ABOUT WESTBROOK IN HIS FACE!!!!! NEVER!!! Because Russ is from the streets of Compton, California!! He grew up rough. Around gangs etc. Unlike Colin who grew up here in the Seattle, Washington area.

One thing for sure Russ will let Cowherd know what time it is when Colin EVER would have Russ on his TV program because Westbrook is a very intelligent African American brotha. Cowherd treats Westbrook like a intelligent Negro.

Westbrook is a multi-millionaire who has a family and a mom and a dad. Also the Russell Westbrook Foundation has formed numerous “Russell Westbrook Reading Centers” for kids growing up in the L.A. area and in OKC. And his foundation does a LOT more things for the youth year round.

But has Colin Cowherd EVER discussed the “Russell Westbrook Foundation” and all the things the foundations has done and will do? HELL NO!! Because Cowherd is too busy HATING on Westbrook TIME AND TIME AND TIME AGAIN!! 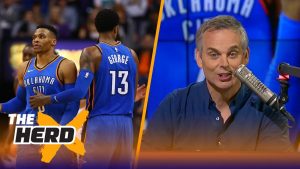 It is time for the mistreatment of Westbrook by Colin Cowherd on Fox Sports TO STOP!! Cowherd goes over the line when blasting Westbrook when he talks about him as a black man in America!!

Finally, RUSSELL WESTBROOK HAS NEVER BEEN IN TROUBLE IN ANY WAY!! He plays his game on the court and then drives home to his family. He says if fools and empty headed buffoons who has NEVER played any type of sports in a high level like Colin Cowherd and ANOTHER buffoon in Fox Sports host and Cowherd “NEGRO PUPPET” Jason Whitlock, want to continue to blast him….go ahead. He ain’t worried about them!!

But again ladies and gentlemen will Cowherd and Whitlock say the things they say about him over the air behind his back in his face? Here is the answer…HELL NO!!!!!!!!

Lil Kim Says Biggie Talks To Her While She Is Sleeping

What’s Going On With The Cosby Kids