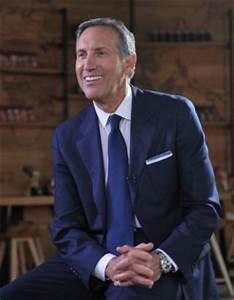 Ladies and gentlemen I watch a lot of news on MSNBC and CNN. I stay away from Fox News unless I want my blood pressure to be a problem. No Fox News for me!

And this week one man’s name has been in the news the last few days. His name is Howard Schultz. “Mr. Sell Out”, Howard Schultz!!

The man who started Starbucks right here in Seattle, Washington. Starbucks has made Howard a billionaire. He sold the company a few years ago. He still is on the board of the company.

As a businessman when it comes to Starbucks he did a great job. We all know that. But it is another business he was involved in as a majority owner that is a problem for many of us. That business was the Seattle Sonics of the NBA.

Howard could not get a new arena done. Which at that time in the mid 2000’s was true. Former Seattle Mayor Nickles did not really help the situation. He did not help at all. Mayor Nickles was not a NBA or Sonics fan. He barely went to a game at Key Arena.

So Schultz decided to make a huge profit and sell the Seattle Sonics in 2006 to Clay Bennett who is from Oklahoma City. Mr. Bennett said he would keep the team in Seattle. HE LIED. Using the excuse of a lack of a new arena deal, he moved the Sonics from Seattle to OKC in 2008.

While they were still here in Seattle, Bennett did not really try hard to keep the team here. His goal was to move the Sonics to his home city of OKC. He did just that.

The Seattle Sonics was here in my city for 41 YEARS!! The Sonics won a title in 1979 led by head coach Lenny Wilkens and “Downtown” Freddie Brown, Jack Sikma, “The Wizard” Gus Williams and three players who are no longer with us. “DJ” Dennis Johnson, Big Lonnie Shelton and “JJ” John Johnson.

Sonics fans have SUFFERED big time since our NBA team packed up and left with Mr. Bennett to OKC with recently drafted and a young Kevin Durant. A year later while the team was still here in Seattle, the team drafted another young future star, Russell Westbrook.

When the Sonics left town it was like a family member died. I am a NBA junky. I attended many  many Sonics games at the Key. Then my hometown team was gone to OKC!! I WILL NEVER GET OVER OUR TEAM MOVING TO OKC!

And I am sure ALL Sonics fans blame one person and one person only for the departure of our team that was here for 41 years. That person is “Mr. Starbucks” Howard Schultz!!

The man has barely shown his face in the city he started his billion dollar coffee empire unless he is pushing his book like he is doing right now. So along with pushing his book, Schultz is honestly thinking about RUNNING FOR PRESIDENT OF THE UNITED STATES!! SAY WHAT??? It is true readers.

And many people in the Democratic Party are telling Howard please do not decide to run because if he runs, it could truly help Trump stay in the White House. If he runs, Schultz will be a independent. He will take votes away from other Democratic candidates running for President. And this is a fact.

I am joining many many others to say Howard Schultz should stick to selling books and please do not run. The word will spread on how when he sold the Sonics to a person not from Seatte and that person moved the team, it hurt businesses around Key Arena. Some went out of business. Many Sonics fans will be VERY VERY vocal if Howard runs for President. This is a fact!!

So we will see if “Mr. Starbucks” or “Mr. Sell Out” will run. I will again say “PLEASE HOWARD DO NOT RUN.” It will be a huge huge mistake. This is one man’s opinion.

Ray J Says Kardashian Should Thank Him For Her Popularity/WHAT!

Oscar De La Hoya Wants To Fight Again…WHY WHY WHY??