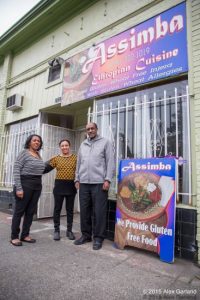 As I drove along Rainier Ave South or Martin Luther King Way South here in Seattle I am constantly amazed about one thing. I am amazed about the lack of African American owned businesses.

From South Henderson to East Yesler/Jackson St along MLK Way South and also Rainier Ave South here in Seattle, their is very few African American owned businesses. It is shocking ladies and gentlemen. Shocking. I just do not understand how and why this is happening.

But what I do see is MALL AFTER MALL AFTER MALL of Asian owned and East African owned businesses. Selling everything you can think of. Shoes, a tux, a wedding dress, restaurants, computer repair, new cell phones, travel agencies,  grocery stores, dollar stores, mom and pop stores and much much more!

And when Asians and East Africans open up a new business, their community SUPPORTS THE NEW BUSINESS and this is a fact readers. You do not see many of them closing because of lack of support.

I stay in the Dakotas Apt in the Central Area/Rainier Valley. I can look at my window and see a East African owned mom and pop store, a restaurant and a business that sells East African dresses and men gear and much more. And their is a Asian owned beauty shop/barber shop.

The only African American owned business in this area is my friends at Emerald City Fish and Chips. And Willies Bar B Cue a block or so away.  That’s it folks. Truly sad.

I grew up in the area. I grew up on 30th and East Union and I went to school at Madrona as a kid. I makes me sick in my tummy to see the lack of African American owned businesses in the area. There is the legendary Facts Newspaper office and a barber shop. That’s it. SAD SAD SAD.

They came to America to work very very hard to help feed their families and pay their rent and many are driving brand new cars. Now the new car story I will discuss in a future article because I have some strong thought on that.

The reason their are ZERO African American mom and pops stores in Seattle’s Rainier Valley and Central Area is something to really think about readers. Folks from Ethiopia, India, Vietnam, Kenya, Turkey, Mexico, Cuba etc have mom and pops stores, gas stations and more.

It seems African Americans want to open another church, bar be cure joint, another detail business or another beauty shop as a whole. Of course we have different kind of businesses but one thing is a fact. THERE ARE ZERO, LET ME REPEAT…ZERO MALLS FULL OF AFRICAN AMERICAN OWNED BUSINESSES IN SEATTLE’S CENTRAL AREA AND RAINIER VALLEY. In my opinion, it stands out like two left shoes!!

Here is a question ladies and gentlemen. WHY? Some say many folks from other countries come to the U.S. with

money. That is BS in my opinion. I just do not agree.

A lot of East Africans came to America just with the shoes on their feet and their kids feet and what they had on when they got here. I have talked to many East Africans AND Asians. The have one thing that in my opinion we as African Americans have a problem with and this UNITY.

East Africans will have many meetings at someones apartment or house and come up with a business idea. They will then open up a bank account and pool their cash. Now again I will discuss how in my opinion many East Africans are able to save money to open a business.

But for this article, East Africans and Asians are saving up money to open as I said EVERY KIND OF BUSINESS YOU CAN THINK OF JUST ABOUT. Don’t forget about Mexican Americans too!! They have plenty of Mexican food trucks or stands in Seattle’s Rainier Valley and Central Area. And they also have different kind of businesses. And like East Africans and Asians, they have unity and work together and support each other.

This person has did this in my strong opinion to for sure build up reputation and build his already HUGE ego. There is no doubt in my mind, this dudes ego is as big as Safeco Field, Century Link Field and Husky Stadium put together.

Check this out. I will admit that at times I will walk into a Asian owned store and the worker will think I want to steal something. I quickly tell them I did not come to your store or business to steal. I came to spend my money just like anyone else will do.

Finally I am asking African Americans here in town to try to support the few businesses we have with dollars. Like for instance my business…”Music Inner City TV” and “Sports Inner City TV”/Comcast Xfinity On Demand/Xfinity X1/Washington State-Oregon-California. And here online at “Music Inner City News Magazine.”

LeBron James Helps Youth To Have A Clubhouse In Akron