One of the things I have tried to do with my websites over the years is to bring you stories and information that the “majority” media does not bring to the table.

So many times African American entertainers and sports stars do a lot of positive things for people and do positive things in the community. BUT sorry to say these stories are not discussed or if it is, it is discussed with a small article online or in the newspaper. Sports radio talks negativity also ladies and gentlemen.

But also sorry to say, when a person of color does something wrong it is headline news if they are a “star” or a well known person like NFL QB Cam Newton of the Carolina Panthers.

Cam has done a LOT OF POSITIVE THINGS but it is barely talked about on ESPN or Fox Sports or other major sports media. But let Cam say something that might be considered “negative,” Cam is every where. On Sports Center or The Dan Patrick Show or other sports media. Truly sad.

Newton in the past has surprised kids dying of cancer with a visit. One kid wanted to meet Newton before he died. Cam was the kids idol when he played at Auburn and in the pros. 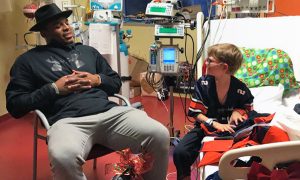 He sent Newton a letter telling him he wanted to meet him one day. The kid’s mom forwarded the letter to Newton via the Panthers. The kid’s parents held a Halloween party at the kids house for all his friends and Cam found out about the party.

What did Cam do? He boarded a chartered jet and flew in to surprise the kid. Cam then rented a big ice cream truck and showed up to the kids party unannounced with a big truck full of ice cream for the kids plus jerseys and signed footballs. The kid and his friends was SO HAPPY!! That was just great what Newton did.

Also Cam Newton has made many many other visits to dying kids or kids who have cancer. But you have to search for the story.

Recently Newton donated 180 bikes and also donated than $100,000 in gifts at five different locations across the Carolinas. Newton has made it a habit to donate thousands of dollars of gifts to dying kids and to kids in the inner city who may be poor. Read the story here above what Cam did recently. What Cam Newton does is just great!

But the media does not want to concentrate on the positive when it comes to guys like Newton, Micheal Bennett, Richard Sherman, “Boogie” Cousins and more. This is wrong!!

Shout out to Cam Newton for being a role model for young kids. Kids of all races look up to Cam and he knows this. Guys like Newton can just sit back and count his money, buy a 20 cars, three mansions and buy a huge boat. Which maybe he does folks. BUT he also has not forgot where he has come from.

His parents may have a lot to do with Newton giving back. What ever the reason, it is great what Cam Newton does in the community for kids. Just great!!

T-Boz Blasting So Called Reality Stars With No Talent

I Have Much Respect For John Legend