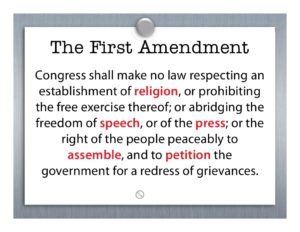 Hope everyone is well. Because of a situation I recently had, I want to briefly let folks know if you did not know, a little about the First Amendment. Because I am sure like myself many of you folks heard it mentioned but did not know a lot about it.

So i took it upon myself to learn a little bit more on this topic. The First Amendment of the United States Constitution protects the right to freedom of expression from government interference. It prohibits any laws that establish a national religion, impede the free exercise of religion, abridge the freedom of speech, infringe upon the freedom of the press, interfere with the right to peaceably assemble, or prohibit citizens from petitioning for a governmental redress of grievances.

Generally, a person cannot be held liable, either criminally or civilly for anything written of spoken about a person or topic, so long as it is truthful or based on an honest opinion, and such statements. The right to free speech includes other mediums of expression that communicate a message.

Because of what happened to me recently which some of you know about, I thought I would talk a little about the First Amendment here on “Music Inner City News Magazine”

African American Children: 72% Growing Up Where Mom Is Unwed

Where Was The African Americans At The Golden Globes?