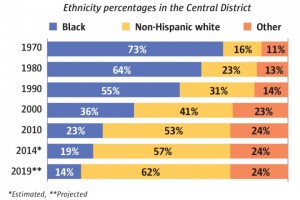 Ladies and gentlemen I am a person who grew up on 30th and East Spring St. here in Seattle, Washington’s Central Area. I went to Madrona Elementary School and Meany Middle School. And then Roosevelt in North Seattle.

I used to be in a African American neighborhood. I went to Madrona with plenty of African American kids. Black teachers and principals and I felt relaxed. The playground at recess or lunchtime was full of black kids and faces. I got my haircut at Erma’s Barber Shop and Daye’s Barber Shop and went to Joe’s Grocery Store owned by Joe and Mea and Madrona Pharmacy to by candy and sports magazines. Went to IGA Store.

I went to the Doll House and Sammy’s for great hamburgers and fries. I also went to Jordan’s for candy and magazines and pop etc. I walked up East Union St to walk to Meany Middle School. Past KZAM Radio and see the dj’s talking on the air. There was a Chinese place to buy food on East Union and the food was great. Just like it was at Mrs. Helens and Oscars on East Madison.

During the summer Madrona Park was packed on three courts with guys and gals shooting hoops. There used to be African American plays at Black Arts West on 34th and East Union. The Black Panthers offices were on 34th too.

I used to go to the Red Apple for stuff too. They had great baked chicken at Red Apple at Promenade 23. Promenade 23 was part owned by a family friend, the late Jimmy Sumler. Used to run into him all the time. He was a member of a social club that my late dad Leon Curvey was a member too called the Westerners. Jimmy also owned Jimmy’s on East Madison. They also had great food!!

I grew up going to church and Sunday school at Mt. Zion where the late great Rev Samuel McKinney was the pastor. Of course Pastor Mckinney recently pasted away. RIP to Rev. He was a great man.

Because of gentrification “my Madrona area” is no longer the same and it hurts me deeply. I am a Adult School Crossing Guard on 34th and East Union right by the school I went to from kindergarten thur 6th grade, Madrona School. I leave my job in the morning and afternoon EVERY DAY feeling sad that I do not hardly see black faces. I see plenty of white folks driving expensive Audi’s and BMWs and Mercedes and Volvos etc.  I have been on 32rd and now 34th and East Union on my job for going on four years.

And every day I leave sad and get in my car feeling sad. Saying to myself what has happened to the Central Area I grew up in. When ever I see a black face I am VERY VERY happy. Mainly I see white folks and white folks walking their freakin dogs. Some walking three dogs at a time. Big poodles and little dogs.  Sorry to say, white folks hang with other white folks. They act like they “own the Madrona area”  NO they do not own the Madrona as far as I am concerned.

And as a school crossing guard I have sorry to say experienced racism on the job. Shocking this would happen to me a African American in a former African American area. But it is true readers. The subtle racism by white folks which is the worse.

Like for instance parents from a special Seattle Public School named TOPs whose kids catch the bus to school at 34th and East Union where I am at every morning. TOPS is a school for kids who are very very smart and they have a different form of education than regular Seattle Public Schools. I slowly began to notice something.

So I decided to not say anything to them anymore. I am not going to go out my way to speak to these “uppity” acting TOPS parents any more. It is not going to happen the rest of the school year. Sorry to say one of the parents who acts “uppity” is African American.

Gentrification is going on in a lot of major cities in the U.S. In L.A. and New York and other cities. Taxes go up, whites move in and African Americans move out. Because of gentrification the Central Area here in Seattle has turned into yuppie land. Powell Burnett Park and other parks in the area full of white folks and there kids and of course their dogs.

My good friend Wyking Garrett is doing a huge job trying to keep a little of the CA that gentrification has not hit yet. But he has a very hard job ladies and gentlemen.

It hurts me when I drive down 23rd and pass by Earls Cut and Styles and see basically nothing but white folks. It is like I am dreaming. I is amazing that this has happened and happened quickly. Just look at the chart I have here. To me it is very very devastating  as a guy who grew up on 3oth and East Spring St.. It is just unreal folks!!

There was a time when most white folks would fly past 23rd and East Union or 22rd/23rd and East Madison where Oscars and Deano’s was  in their cars like they were driving in the Indy 500!! With their windows up etc. They wanted no part of the Central Area.

Now all I see is white folks on East Union and East Madison like I said, walking their dogs or walking with another group of white folks, never do I see white folks walking with some black folks. They hang to themselves. And most of time do not speak to African Americans. They will look at black folks like they are criminals or gang members. Or like a black dude will steal their cell phone.

I will give some more of my thoughts on the gentrification of Seattle’s Central Area soon. A area where sky high rent for apartments and town homes and homes have forced African Americans out and whites in. When I see the Red Apple gone, Richlens gone, it hurts me. It hurts me each and every day!!

Griffey’s Daughter Put It Over The Top For M’s