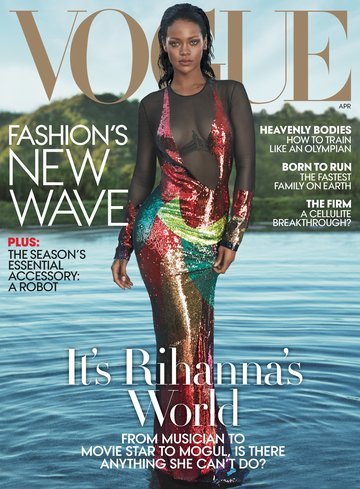 Word is Beyonce was due to drop her new song song “Formation”, days before Rihanna’s new release “ANTI”, but Rihanna dropped her new release like it was due to be dropped.  So there is word out and about that Beyonce has tried to outshine Rihanna.

Recently Rihanna did a interview with Vogue and she addressed the ongoing talk about her rivalry with Beyonce. She said “Here’s the deal, people just get excited to feast on something that’s negative. Something that’s competitive. Something that’s, you know, a rivalry. And that’s just not what I wake up to. Because I can only do me. And nobody else is going to be able to do that.”

I agree with Rihanna. The media is looking for a beef. Just because Ri is signed to Beyonce’s husband, Jay Z’s label and this release stuff happened the media saying wow what is really going on. When in reality most likely nothing is going on.

As a fan of good music, I do not give a damn who release was out first or not. Who gives a damn ladies and gentlemen? Both of ladies are very very talented as we all know. At times I really worry about Rihanna. It seems she is confused. At times she seems to be really out there mentally with some of stuff she says and some of outfits she wears. Just like Miley Cyrus.

And word is her career is suffering right now. Because it is a fact, her sales of her music is down. Unlike Adele or Taylor Swift. People are asking what is wrong with Rihanna. Well let’s see what the future holds. Ri is younger than B. I will be listening and watching what is really going on with Rihanna. Because I am not worried about Beyonce. She will always stand above the rest in book.

Host Of “Hardball” on MSNBC Chris Matthews Steps Down: His Replacement Should Be “AM Joy” Host Joy Reid!!