“One Man Opinion” by Gordon Curvey 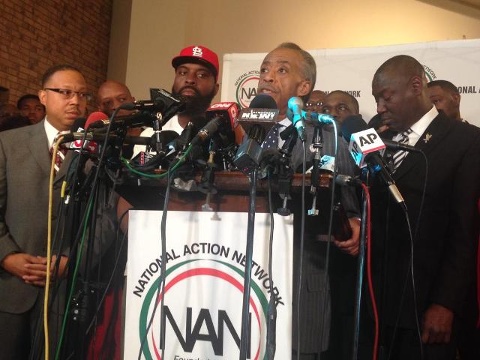 Ladies and gentleman I watched the press conference today in Ferguson that featured the Micheal Brown family’s lawyers and others. I just KNEW that the Rev. Al Sharpton would be in front of the freakin cameras.

I was right folks. It seems Rev. Al loves to see himself on TV and online etc. Why is he always out front of high profile cases? Rev Al always says he was asked to show up all the time. I think that is BS. I truly believe Rev Al puts HIMSELF in front of the cameras to be seen. There is no doubt in my mind that this is the case. He likes some Rev Al!

I used to be a tremendous supporter of Rev Al but it has got to the point where I am tired of seeing him out front in press conferences in big cases all over the US. And readers DO NOT think he is doing this in these different cities for free. Hell no! He is making money for himself and his organization the National Action Network.

How come other leaders cannot be out front like Rev Dr. Micheal Eric Dyson or National Urban League President Mark Marial or other leaders in the African American community? Most of the time Marial is there at these press conferences BUT Sharpton is the one HOGGING the microphone all the time. At the press conference today in Ferguson, it was Rev Sharpton out front as always. I am tired of this happening readers.

I am mad as hell that Officer Wilson is allowed to walk in his killing of young unarmed Micheal Brown. It is a OUTRAGE! It seems a black life means NOTHING when a white police kills a black man. The police is ALWAYS found innocent. THIS IS WRONG READERS!!

Having said that I think it is WRONG for folks to riot and destroy black owned mom and pop stores. It is very very sad to see this going on in Ferguson. Yes I understand folks are upset. I am very upset. But people do NOT need to destroy their community. I hope this will stop.

Also readers let me say this. FOX NEWS LED BY SEAN HANNITY AND BILL O’REILLY ARE RACIST BIGOTS along with Megyn Kelly.  I watched Fox News for a little while after the wrong decision was made to let Wilson go. Hannity and O’Reilly and Kelly all were on the side of the killer Wilson. Saying the decision was correct etc. FLAT OUT AND PURE RACISM!!

Finally I wish ALL OF MICHEAL BROWN’S LAWYERS WOULD STAY OFF OF THE RACIST HANNITY AND O’REILLY AND KELLY’S PROGRAMS!! It is beyond me why they would go on Fox News. When they have shown they are racist bigots. Look at the way Hannity and Kelly treats President Obama. I THINK THEY HATE HIM. I also think they are the reason people want to kill the President. I truly believe this readers and I will not change my mind on this.

It is to bad that BET is such a TERRIBLE TV station. They do not have a nightly news show for African Americans and the same goes for TV One. This is truly sad.  Story on this issue soon right here on “Music Inner City News Magazine”