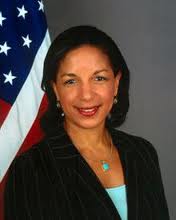 As we all know by now, President Barack Obama won by a landslide re-election for four more years as President of The United States. And as a supporter I am very happy to see the President will get four more years. He has a lot of work to do to help folks obtain new jobs so they feed their families and pay their bills.

But what I am not happy about is the Republicans crying like big babies because Mitt Romney did not win the election. Have you seen the looks on their faces when they are being interviewed on CNN or MSNBC or Fox News when the discussion is about the President winning? The look very upset and mad.

So in that vain, we have the possible nomination of Susan Rice to replace current Secretary of State Hillary Clinton who is going to retire.  But the folks on the right ain’t having it. They are fighting against her before the President can name his choice. And it has got out of hand.

The folks on the right are blaming Ms. Rice for saying lies etc on TV regarding the terrible and sad killings in Benghazi. The bottom line is Susan just spoke to what she was given to say. But the Republicans are blaming her for everything. This is wrong!

Sen. John McCain and many others on the right and of course Sean Hannity and Fox News are leading a terrible witch hunt against the highly intelligent and qualified Susan Rice. They refuse to back down.

So it is VERY interesting to see who President Obama will nominate. Will it be Ms. Rice? Most people think so. If so, things will get very interesting for sure.

LOG ON TO OUR “MUSIC INNER CITY ONLINE STORE” To buy hats, t-shirts, mugs and much more. Powered by Cafe Press.  Click here