Students held big protest over the re-election of President Barack Obama Tuesday night on the University of Mississippi campus. Why did this happen folks? This is crazy. (Read story from washingtonpost.com right here) 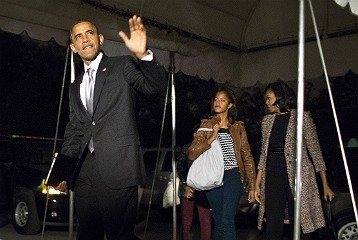 To see President Obama walk on stage before a wild and cheering crowd in Chicago with First Lady Michelle Obama and their beautiful children, it just made me very happy.  And if you are a supporter of the President I am sure you are happy too because in my opinion it would have been a huge mistake to elect Mitt Romney.

If Romney was elected it would be President George W. Bush all over again. Romney said if elected he would make cuts to Medicare, Amtrack, Planned Parenthood, Social Sucurity, FEMA, food stamps and much more. It would have been terrible. How anyone would vote for Romney is beyond me readers. But then again Romney had Fox News on his side led by Sean Hanitty.

I watched Fox News after CNN said that President had won and this crazy Karl Rove was making excuses and was saying he did not think the President had won yet. Rove is crazy! Can’t wait to hear Hannity cry like a baby because his guy Romney was beat. But you can bet that Hannity will continue to talk negative about President Obama on a nightly basis during his second term just like he did during the first term.

Finally, as I watched the crowd when Romney gave his speech after his loss, I could not see a black face. It was a sea of white faces. The Republicans need to realize that America is not all white. It is a melting pot of African Americans, Asians, Latinos, East Africans etc. The right needs to start RIGHT NOW to reach into the black community and latino community etc and show that they care about our plight in America.

This is America folks. And on November 6th, Americans voted for President Obama to serve four more years. He has a lot of work to do. People need jobs etc but I think the President will try to work hard to improve some of the problems that are going on today. Hopefully the Republicans will FINALLY work with him because so far they have not. I am happy that President Obama won a second term now as Big Ed says on his show on MSNBC “Let’s get to work”

Troy Davis Is Executed In Georgia After A Delay

Total Disrespect By A Lady I Have Known Since She Was Young & All Because Of One Word…HATRED!