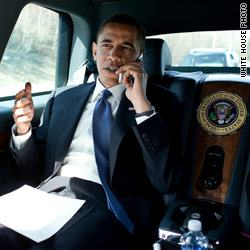 President Barack Obama flew into the Big Apple for a fundraiser after a trip to Disney World In Florida for a major announcement. This is 2012 the year of the big election for his current job so he is hitting the road to talk to the people.

He is letting the people know that his job will take longer than one term. And he asking his supporters to support him in the elections so he can finish his job that he started. He has a hard job in front of him but but we here at “Music Inner City” is a supporter of the President.

Yes things are rough. Companies like Clear Channel are cutting back big time but slowly but surely things are getting better. He needs another term to help get people back to work.

The other candidates also blasted the President at will. Remember one of them called President Obama “a food stamp President” What kind of insane comment is that? It has to stop.

While in New York he went to a fundraiser at the home of filmmaker Spike Lee that brought in a lot of money and then he went to the legendary Apollo Theater in Harlem to speak. In the crowd was another legend. Former guest on Seattle’s “Music Inner City TV” Rev. Al Green.

President Obama noticed Rev. Green was in the audience so he said a few things about Rev. Green and then sang a few words from a Green hit “Let’s Stay Together” and the crowd went crazy. President Obama can hold a tune folks. Click the link above to see the Prez at the Apollo. Gordon Curvey

Jay Z, West and Rihanna To Kick Of Leno’s Program

Why Are Rap Artists Supporting Miley And Her Actions?