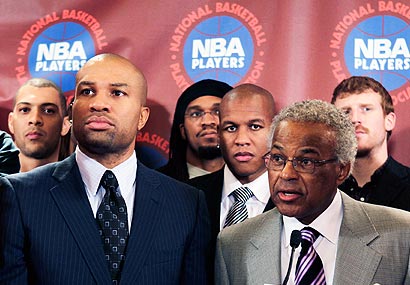 I was thinking positive regarding today would be a good day as far as ending the NBA lockout but I was wrong big time because the NBA players rejected the owners deal.

The owners led by David Stern had a deal on the table that would have started the season on December 15th and the season would be a 72 game season instead of 82. But that ain’t going to happen.

The way it looks now readers NBA fans will have to look at old games from the 70’s and 80’s and 90’s on NBA-TV instead of watching KD, KG and Kobe. This is truly truly sad.

I am on the players side big time. The players make the NBA so the owners can bank BIG dollars. Fans pack NBA arenas to see D-Wade, LeBron, Dirk, Seattle’s own Jamal Crawford and Jason Terry and others play but it looks like we will not watch NBA games for awhile.

If you listened to Stern today, the owners will not back down and he blasted Billy Hunter who works for the players. He sounded very arrount and uppity. Like what Bryant Gumbel and another person said about Stern that he acts like a “platation owner and the players are his slaves” This is outrage!! Remember the NBA players are majority African American or a person of color and the owners are 99% white. Micheal Jordan is the only black owner.

Being in Seattle, I cannot watch live NBA basketball anymore so I hav to watch on TV or go to Portland or watch a game their games are always sold out. I have to watch the games on NBA-TV or TNT or ESPN. I just want to see the season start. That’s all I want as a sports fan.   Gordon Curvey

Sharpton With MJ But Where Is The Pressure On Hannity?

Why We Do Not See MLB Players Doing Commercials?