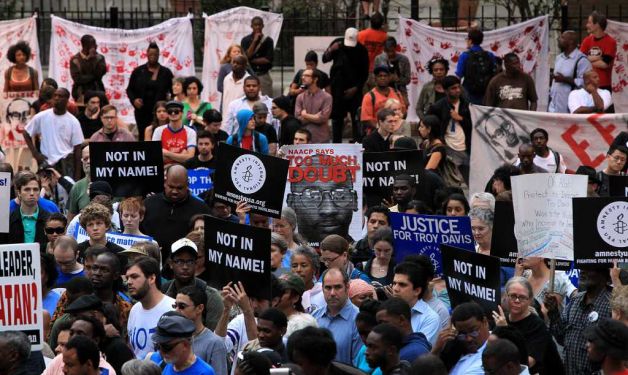 Troy Davis was executed in Georgia for the 1989 killing of a off duty police officer. But there is a huge problem that happened. Their is a very good chance a innocent man was killed by the state of Georgia.

Former President Jimmy Carter and other national and even world promenent people said that Troy Davis should not die.

Here is question. Where was the voices of Bill Clinton and Rev. Jesse Jackson and Tavis Smiley and Pro. Cornel West?

As always Rev Al Sharpton made his voice heard about the execution of Davis on his Radio One radio show and on his TV show on MSNBC. Rev. Sharpton is always on the front line.

For more details read the link above. But the killing of a man who the state of Georgia has no evidence on in the killing of the police officer should be a wake up call. The United States should do away with the death penelty. Because maybe innocent people will be put to death. The killing of Troy Anthony Davis is very very upsetting and very very wrong.     Gordon Curvey

Russell Wilson Is More Than A “Teacher’s Pet”

Why We Do Not See MLB Players Doing Commercials?

Protest Against Spin-Off Of “Basketball Wives” Please Sign It!!