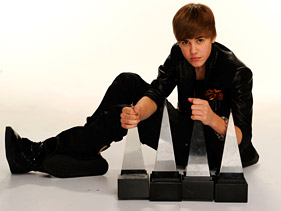 This year I was posted up in snowy and cold Seattle to watch the 2010 American Music Awards. I have been lucky enough to cover the AMA’s only once. Why I do not understand but anyway I always give my opinions of the “urban” acts of the show right here.

The show started with a great with a performance by Rihanna. She looked a little nervous. Her dancing skills need to improve a little but the female can sing so she make up for the lack of dancing skills.

I also enjoyed the performance by Ne-Yo. It was one of the best of the night. Also young Justin Bieber performance was real good with the gospal group in the background. He got a standing ovation. Bieber also won four awards.

Usher performance was great too. Full of energy and great dancing. The show ended with a performance by The Backstreet Boys and New Kids On The Block together. It was a great ending of the show. Shout out to the AMA’s for putting on a energetic and exciting show year after year.     Gordon Curvey

Will The Seattle Seahawks Trade Russell Wilson? I Say A Big Fat NO! At Least For Now

Danica Patrick Needs To Win A Race Before Big Move!