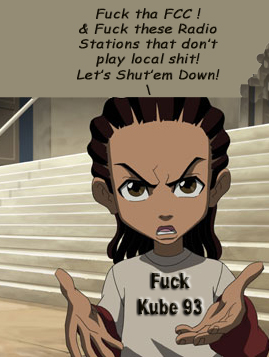 (Thanks for everyone’s support during my health problems!)

I came upon the above article on the net yesterday and even though it was from 1997, every thing in the article is happening TODAY!! And yours truly is even mentioned. To my surprise!!

The article is by a cat who is not afraid TO SPEAK UP AND TAKE STANDS, just like me. It is a cat named Davy D out of the Bay Area. Just like my homie former Seattle NAACP chairman Carl Mack. Not afraid to speak up.

The above article is about Seattle’s KUBE 93 and their stance of not playing local artists during prim time. Let Usher or Drake or Lil Wayne or Ray J break out with a new joint, KUBE is all over it. But let Mac Slug or Chocolate or Twin G or Tacoma’s own Bassrock come out with a new joint and it is nowhere to be found on KUBE’s playlist.

KUBE 93 has been playing national artists on KUBE 93 without giving PRIME TIME air spins for local artists unless you are Seattle’s own Sir Mix-A-Lot and a few others.

It is time for local urban artists to stand up and take a stand just like artists did against Power 106 in L.A. and KMEL in the Bay. They said enough is enough and HIT THE STREETS with pickets and a march. THIS NEEDS TO HAPPEN HERE IN SEATTLE. The question ……….will it happen. I think no.

I think local artist are scared to take a stand. Afriad of their rep, afraid to take a risk. To laid back. Cats in Los Angeles and San Fran were not afraid. So now San Quinn and Mac Mall and L.A. artist can get their stuff played at 5pm and 6pm and 7pm.   hours instead of 11pm or midnight or not at all.

Local Seattle area artists the ball is in your court. Will you shoot and sink a 15 footer or shoot a brick. We will see. Again read my homies Davy D article. It is 2010 not 1997 but nothing has changed.

KUBE gave me real nice sound system for my computer after my terrible fire in 2005 for which I was very happy!!! But then they continued to ban me from the SJ etc.

This WILL NOT happen if local Seattle/Tacoma artists continue to sit on their ass. and not march down to the radio meetings that KUBE 93 has EVERY WEEK and demand they will play the LOCAL artists hot new joint during PRIME TIME!! do not TAKE A TERRIBLE JOINT DOWN THEIR.

As you local artist lay in the cut and do nothing then you will not have airspins on KUBE. If you want to continue to be ghetto celebrities to catch the honeys then keep doing what you are doing as local artists.

In 1994 and 1998 myself, Curtis “Boss” Elerson, Gene Dexter, Silver Shadow D., Wojack, Robert Redwine, Melvin Hart and a few others brought out the pickets in front of KUBE 93’s offices. We meant business!!!! We had thousands of stickers and a bunch of pickets. We stayed up until 3am making picketts etc.

A LOT OF YOU YOUNG CATS DON’T KNOW THIS HAPPENED BUT IT DID. It is time for a new generation to do what we OG’s did in 94′ and 98′. You have to DEMAND THAT KUBE PLAYS YOUR JOINTS DURING PRIME TIME!! A FCC law will back you up because I am sure those 8,500 hours have not been taken up. REMEMBER THIS IS A LAW ARTISTS. DEMAND THAT KUBE PLAY YOUR HOT JOINTS!!

The reason for our protest was for local artists air spins and to have more African American dj’s. As a result of our protests “Future Flavours” was started and Tony B’s work load increased at KUBE. But sorry to say, as far as airspins is concerned it ain’t happening except for on J-Moore’s late Sunday night program “Sunday Night Sound Sessions” Also “Streetbeat” with host Tony B has NEVER had myself on as a guest to discuss my almost TWO DECADES broadcasting. The question is why? Is it Tony B and his ego or his boss at KUBE93? I don’t know, only Tony knows.

Do you want to continue to be “ghetto celebrities” or do you want to do what my friend Davy D says in the above article? Time will tell. Stop the sleep walking artists. Stop being afraid to take a stand. Organize, build your pickett’s and let KUBE 93 know that you want radio air spins during prime time on KUBE just like they did at Power 93 in L.A. and KMEL in the Bay.

Cats were not afriad in SF and LA. Hundreds hit the street. IT CAN HAPPEN HERE IN SEATTLE. 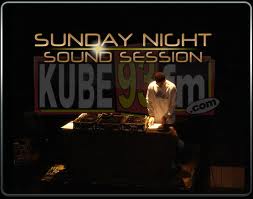 Another thing is I am tired of is hearing hard core gangsta rappers or just rappers and urban artists fall into KUBE to be interviewed by Eric Powers and for some reason the terrible Dirty Harry. As a OG African American in the game it just turns my tummy to hear the so called interviews. It hurts big time.

OK, these are my feelings, please read the above link and remember NOTHING  has changed at KUBE since 97 as far as prime time radio spins. The ball is in the artists court.  What are the artists going to do?

Finally, I think it is a shame that KUBE has blocked my coverage of the KUBE Summer Jam for the last five years. Meanwhile they allow artists to use the word “nigga” and other words with young kids in the audience.

KUBE will not have warnings to parents and guardians on the KUBE website or on the air or on the tickets. All KUBE cares about is making $$$ of the BACKS OF AFRICAN AMERICAN ARTISTS. After the SJ, they run to the bank.

My friend Julie, why don’t you take the lead?

-M.I.C-TV/Comcast On-Demand (our new location /go to “Get Local” and then “Around The Sound” all over Western Washington.