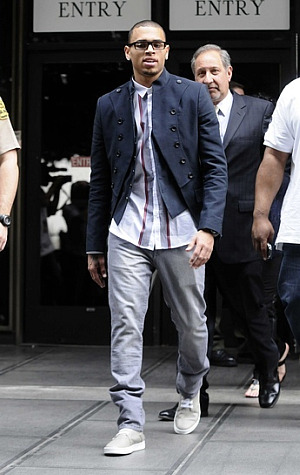 Singer Chris Brown is doing something he thought he would never do. And that is to ask for his fans support in buying his new cd and is also asking radio to play his music.

Ever since his problem of beating of singer Rihanna, he has had problems with his career.

It is for sure not like it was before the problems came down on him.

But in reality Brown cannot blame anyone but himself for his problems. He brought them on himself. He should have did what he did to the beautiful Rihanna.

Having said that, the question is this. Is it time for fans to forgive Brown and buy his music? Is it time for radio to start playing his music again? Truth be told I do not even hear any past Chris Brown music on the radio like “Kiss-Kiss-Kiss” and others. Do you?

Brown is doing every thing courts have asked him to do and more. He is even going to schools and community centers to talk to talk to youth etc.

What will it take for radio and fans to support Chris Brown like before the Rihanna incident? It does not help when programs on TV like “The Insider” and “Showbiz Tonight” continue to blast Brown when ever they can.

This story is very very interesting. Let’ see if the negative treatment of Chris Brown will continue. For his sake and career, I hope the negativity stops.

“Music Inner City News Magazine” The #1 urban online news magazine in the Northwest (U.S.) A spinoff of “Music Inner City TV” on Comcast On-Demand all over Western Washington state 24/7! Just grap your remote and go to the “music” list.

Sports Stars & More Speak Out On The Murder Of George Floyd But What About The Violence?