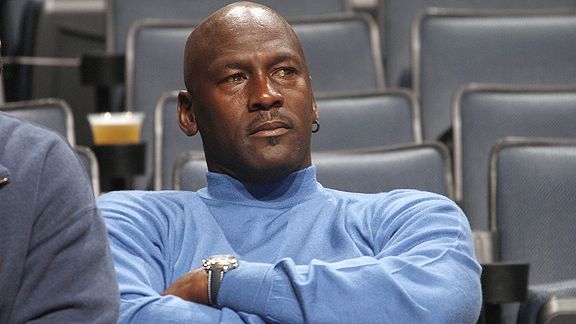 Well former B.E.T owner Bob Johnson finally got tired of owning a basketball team and sold it MJ. The person some people say was the greatest basketball player of all time. I say Magic Johnson though.

Jordan has a very very hard job ahead of him. Will he want to keep Hall of Fame member Larry Brown next season as the head coach? This will be interesting because truth be told the Bobcats have improved this year under Coach Brown.

They have a few pieces in place to have a good team with some added additions. They Have Gerald Wallace and Stephen Jackson on the team. The question is this how will MJ be as a owner?

Because MJ might have been a great great player but so far as a GM in Washington and with Bobcats in another position, he has not done a good job. Let’s just tell the truth folks. (yours truly Gordon C. with MJ pic to the right)

One thing for sure it is great that MJ is involved in the NBA in anyway because he is a basketball icon. A sports icon. A flat out legend. I know David Stern is happy to have him around too.

Will he be a owner like Mark Cuban of the Mavericks? Who is at EVERY game sitting right behind the bench of his team? Who knows we will see.

Everyone will be watching Jordan to see what he can do to make the Bobcats a team that can make the playoffs in the future and draw some fans to the arena because when you see a Bobcat game on TV, you will notice a whole lot of empty seats.

So let’s see what the REAL KING (not James) can do as the new owner of the Bobcats in Charlotte.

Be sure to listen to “Sports Inner City Radio” right here on “S.I.C-Online” Urban sports news and issues from the studios of “Music Inner City TV” in Seattle, Washington.

“Music Inner City TV” is the ONLY locally produced urban music video/interview program in the Northwest (U.S.) On the air for going on 20 years!!

Why Did Brian Williams Leave Out Arsenio Hall?